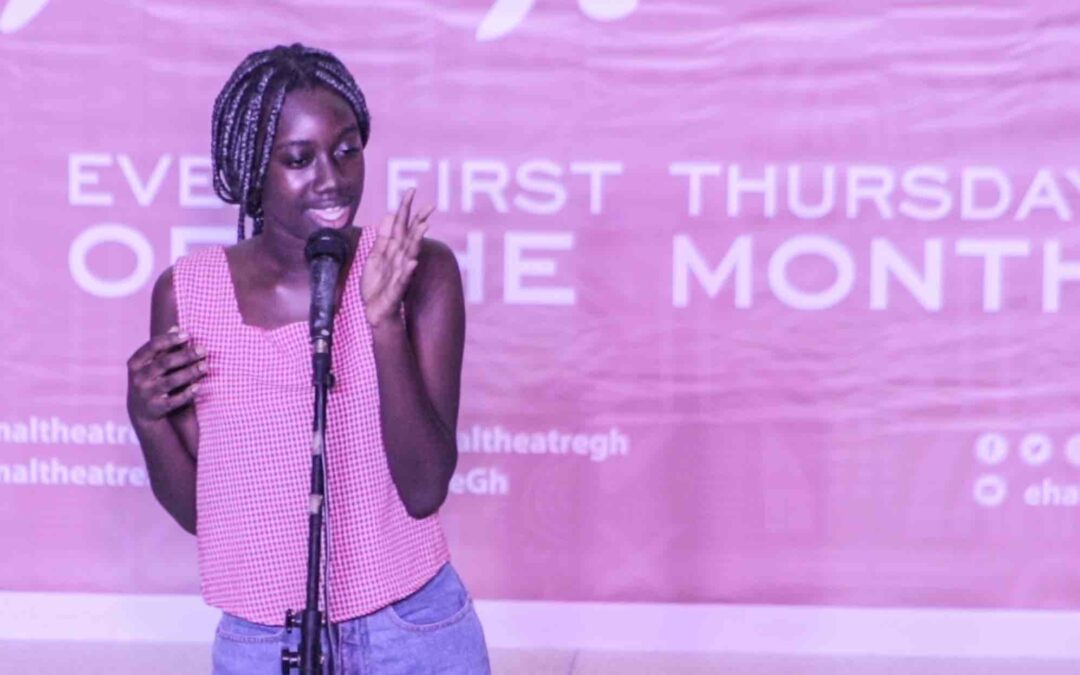 The Maiden Edition of the SheShe Slam began at exactly 7:06pm at the Folks Place, National Theatre on 3rd March, 2022.
15 talented ladies signed up for the slam and they all made it to the show.

Nii Musick welcomed slammers and the audience with his melodious voice and strings.

The MC for the night, Miss Affumwaah, did the introductions and set the ball rolling.

To be fair and just, five volunteers were randomly chosen from the audience to serve as judges.

Judging rules were very simple
– A judge should not be related to any of the slammers in any way.
– Judges are to lift a number between 1-5 after each slammer’s performance.
– After every vote cast, the highest and the least would be taken off and the average becomes the slammers points or score.

Rules for judges were understood.
Rules for the slammers were laid out as well:
1. All slammers go two rounds
2. All pieces must be original
3. Each piece to be delivered within 3mins either recited by heart or read.
4. No props
5. No engagements with audience

The rules were read and understood by all, and then the games begun — 15 well crafted ladies with $100 to be won.

It was a very tough and thrilling slam as all the slammers brought out the best of the best of their talent, they all managed to keep the fully packed Folks Place thrilled and on the edge of their seats as they went neck-to-neck, piece after piece.

At the end of round 1, the top 5 slammers were, Bonkua and Briana who secured 15 points each, Nassam with 14 points, and Twita lit, Xorlali and Korkor with 13 points each.

Nii Musick and Ayorkor refreshed the audience with their soothing voices after the first round, as the slammers rested themselves to come for the second round.

Rules remained same for the second round, but the order of slammers was changed from middle to bottom and then top to middle.

It was another round of fireworks as the slammers kept spitting fire, dropping truths, and giving the audience bars after bars.

In about 40 minutes, round 2 came to a close and there were ties at the top three positions.

In order to split the tie and find the Charm for the maiden edition of the SheShe Slam, who will walk home with the $100 price.
Brianna and Bonkua went neck to neck as they performed their tie-breaking pieces for the audience.

It was a power-packed event filled with chills and thrills. This only tells how grounded female poets and spokenword artistes are in the art. EHALAKASA – it lives in us!